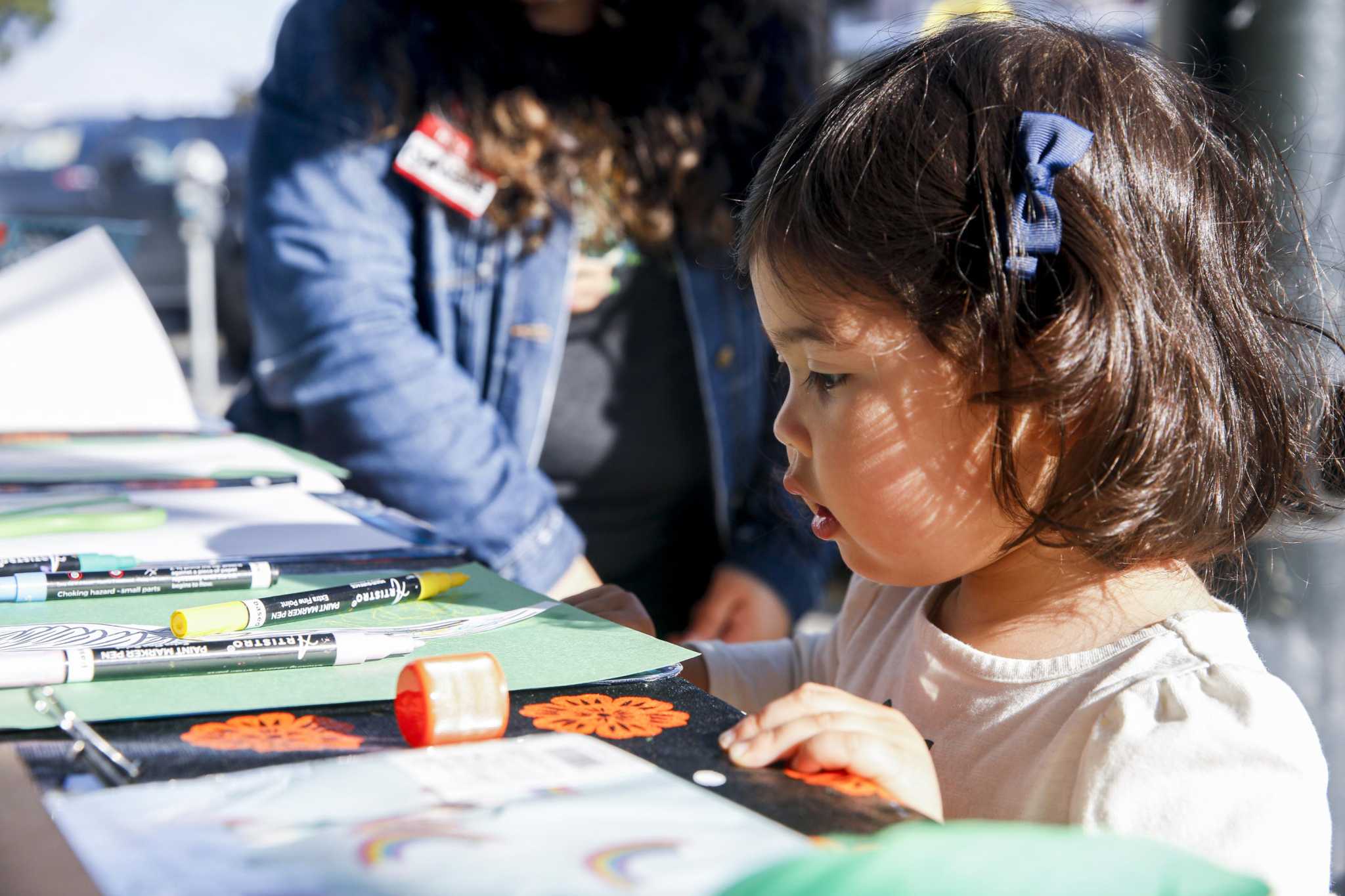 Luna’s Press Books is so small it’s easy to overlook when traveling south on Mission Street. The 184-square-foot bilingual children’s bookstore is sandwiched between a convenience store and preschool near Richland Avenue, where many Central American restaurants and bakeries line the street.

But on a recent Sunday afternoon, the bookstore was hard to miss.

A mix of cumbia, salsa and Latin jazz rang out as people passed to leaf through books and colorful art prints while children made colorful bookmarks and drawings of a quetzal, the national bird of Guatemala , on tables arranged outside. The bookstore organized a launch party for the coloring book “Guatemala, from A to Z” by Susana Sanchez-Young de Lafayette.

“It’s nice to see that Guatemala is represented,” said Susie Orozco Franco, who is of Salvadoran descent and attended the event with her 6-year-old daughter, Sofia. “Especially here in San Francisco where there are a lot of Central Americans.”

Sunday’s event was not a first for Holly Ayala and Jorge Argueta, the wife and husband who own Luna’s. Since the store opened in 2013, they have hosted and sold children’s books focused on Central American culture, especially Salvadoran, written by Central American authors.

In 2015, the duo published their first children’s book, â€œOlita y Manyula: El gran cumpleanosâ€, written by Argueta, a poet, and illustrated by El Aleph SÃ¡nchez, both born in El Salvador.

“Olita y Manyula” tells the story of a young Salvadoran girl, Olita, who visits her family in El Salvador and is invited to a birthday party for Manyula, a beloved elephant who lived in the National Zoo. of El Salvador for 55 years until his death in 2010.

In August of this year, Ayala wrote and published her first bilingual book, “ABC El Salvador”, illustrated by Elizabeth Gomez. The alphabet uses Salvadoran terms for each letter, such as cipotes, or children, and loroco, an edible flower used as an ingredient for pupusas.

Argueta and Ayala aim to make Latino children feel represented in books and proud of their culture, and to serve as a space for Latino authors to promote their books to children, parents and educators in the region of. the Bay.

While Latin American, Black, Native and Asian children have been underrepresented in children’s books for decades, data shows racial representation has slowly improved over the past six years, according to the Cooperative Children’s Book. Center at the University of Wisconsin-Madison, which has tracked statistics on diversity in children’s and adolescent books since 1985. They track the books they receive from large commercial publishers and mid-to-small publishers.

“Prior to that in the last 10 or 20 years it was also increasing but at a much slower rate,” said Madeline Tyner, librarian at the university’s book center. “That said, there are still far fewer books written by and about Blacks, Natives, and Colored people than there are about Whites and White characters.”

Tyner said the improvement is in large part due to the rise of nonprofits that advocate for diversity in children’s literature, such as We Need Diverse Books, in addition to individual publishers of some houses of publishing, self-published authors and small independent publishers.

According to the centre’s latest data analysis, 42.7% of the 3,682 books he received from US publishers in 2018 were about communities of color – meaning that at least one major main character or supporting character was Black / African, Native, Asian, Latinx, Pacific Islander. or Arabic. During that time, 21.4% of the 3,682 books were written or illustrated by at least one person of color.

â€œAlthough 42.7% doesn’t seem so bad, when you break [it] towards racial identity, the numbers get much smaller. For example, in 2018 11.6% of the books we received were about Blacks / Africans, â€Tyner added.

In 2002, only 13% of the 3,150 books received concerned communities of color. During this time, the center only tracked books written by and about Blacks / Africans, Native Americans, Asians Pacific, and Latinxes.

â€œSeeing yourself in a book is so important because it means that there is someone there who sees you, who recognizes your importance, who validates your experiences and seeing authors who write books about someone like you is so. stimulating for kids, â€Tyner said.

One of the reasons there aren’t as many books on children of color written by authors of color is that the publishing industry is not racially diverse and is made up of predominantly white publishers. , said MarÃ­a de la Luz Reyes, professor emeritus of education at the University. from Colorado-Boulder and former elementary school teacher.

â€œUntil we can have Latino publishers in the book publishing houses, not much will change,â€ she said.

“The great difficulty [independent publishers and self-publishers] we have marketing because we don’t have the money for it, â€added de la Luz Reyes, who now writes award-winning bilingual children’s books.

Social media has played a big role in increasing representation as more independent publishers use it to promote their work and connect with educators, writers, and parents. Yet, according to researchers, there is still a long way to go before children’s books fully reflect racial, ethnic, and cultural diversity in the United States and around the world.

In San Francisco, Argueta, of Luna’s, said he and Ayala were inspired to start publishing children’s books after traveling with a group of Latino poets and writers to El Salvador for the annual International Poetry Festival for Children of Manyula, which they have been creating and organizing for the past 13 years. In 2016, Argueta also opened La Biblioteca de los SueÃ±os, or the Library of Dreams, in San Jacinto, El Salvador, after seeing the lack of high-quality books in his homeland.

â€œWe want our children to really love books and their own culture and understand that their country can offer them dreams. [of becoming] doctors, engineers and architects, â€he said.

Through the Luna and Poetry Festivals, Ayala said she and Argueta hope to promote Salvadoran culture and history and support other Latino authors.

Sanchez-Young, who is also a visual reporter for the Los Angeles Times, said the coloring books and artistic designs she creates are inspired by her Guatemalan and Nicaraguan origins.

“I want people (…) to pass it on to their children because we didn’t have it when we were growing up,” she said.