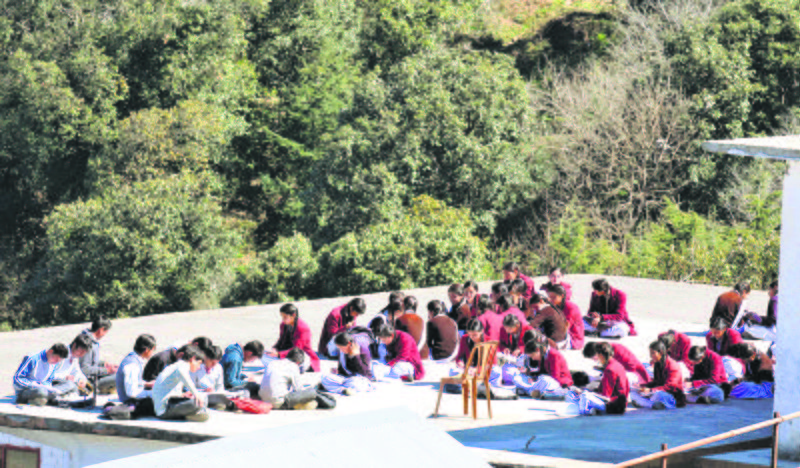 The lost rhythm of sarkari schools: The Tribune India

Recently I met a young great-niece pursuing a PhD at Oxford on the impact of new education policy on primary and secondary education. I know next to nothing about politics, but I remember vividly the state of primary and secondary education in Kumaon during the first two decades after independence. That’s partly because my dad was in the state education department and was deeply invested in his job. Also, as I spent the early years of my school life in Nainital, my memories of that time are still vivid today. As we talked, I realized why a successful system of state-supported education had slowly faded away.

My mother used to say that Almora was among the Indian towns with the highest literacy rate in Independence. I can approve of this because I remember that virtually everyone who worked for us was functionally literate, could write their own letters from home, and also knew rudimentary arithmetic. One of my aunts had a cook, Daulat, renowned for his bad temper and his language. As a Brahmin maharaj who presided over the kitchen of his house, he was also the pandit who performed the daily puja. I still remember many shlokas and prayers he taught us while we sang with him.

This was probably due to the fact that the colonial government had set up an extensive network of primary and secondary schools throughout Kumaon. Even remote tribal outposts, such as Munsiyari, had an Ucch Madhyamik Shiksha Sansthan (Intermediate College) established in the 1920s. This was largely to serve the Raj’s purpose and create a huge Class III force and IV (clerks and chaprasis) for colonial offices. For several years later (until the 1970s), the Lucknow Secretariat and the Delhi Central Secretariat had several Kumaoni babus and chaprasis.

The teachers in these public schools were often the local pujari or grocer. They belonged to the village, were widely respected, and had a vested interest in ensuring that the children of the village learned their lessons well. Teaching was then not a profession but a vocation and for years these former teachers (Maa’s sa’abs) were revered not only by the students but by the entire village. The focus was on Hindi, Sanskrit, basic English and arithmetic: the three vital Rs.

Alongside these modest schools were the posh boarding schools set up in our mountain resorts. Run by Christian missionaries, the first students here were mostly English and Anglo-Indian children. Later Indians were admitted but they came from the high ranks of the army, tea planters, feudal families – to become the future babalog. A good dose of proselytism also continued under the benevolent gaze of the state. More importantly, it introduced a divide between English and Hindi education which was to have profound social fallout later.

The rot set in when India decided to use most of its meager education budget to establish engineering and medical schools and universities. While this was a much-needed step forward to provide higher education to students who could not afford to go to foreign universities, it also led to the gradual decline of the old network of schools. primary and secondary at village and district level. As English assumed a greater role in social and public life, no one wanted to study at the local sarkari school and learn only Hindi and Sanskrit. Soon there were ‘Ingliss-medium’ schools run by private entrepreneurs who barely knew how to write their own name but charged huge sums for the ‘education’ they offered. You see them everywhere now, some turned into IT and coaching centers but dodgy in terms of teaching quality.

There is something else and that is more social and cultural anthropology than anything else. In Kumaon, the Brahmans traditionally occupy a very important part of the village community. Some were landed but many survived through their learning and shastric knowledge. The temples provided them with huge jajmani (as with pandas in Mathura, Varanasi and Haridwar) so the food and dakshina received from the patrons provided them with a modicum of comfort. Added to this was the high sense of social entitlement as a learned village pundit. Often they lived and died in the same place and thus retained their connection with the students throughout their lives. This is unthinkable today and has led to a displacement that is difficult to quantify, but which contributes to the current social upheaval. The traditional respect for guru and knowledge has become, more often than not, a deep contempt for “useless knowledge”. Information and digital devices have now all but replaced the village pathshala and its quaint education system.

Another interesting fact of this ancient system was that hardly any Kumaoni girl or woman remained illiterate. The heavy hand of patriarchy often meant many weren’t sent to school, but homeschooling made up for that. My mother spoke with admiration of her blind grandfather, a renowned Sanskrit scholar and astrologer (that’s why math was on par with Sanskrit in the old Kumaon school system), who made them learn Shabdkosh by heart and could spot a mistake when they recited it to him. Anyone who grew up learning Sanskrit has tremendous mnemonic recall and can recite learned tomes while swaying to an inner rhythm.

I wonder if this lost rhythm will ever return.

Your community: Books to Go kits

The tragedy of English football